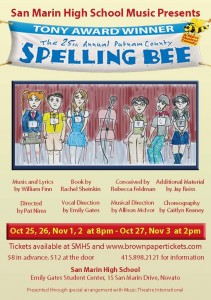 Directed by Pat Nims with choreography by San Marin student Caitlyn Keaney, vocal direction by Emily Gates and musical direction by Allison McIvor. And you can join the cast in the on-stage fun!

In this musical comedy, six young people, overseen by grown-ups who barely managed to escape childhood themselves, learn that winning isn’t everything and that losing doesn’t necessarily make you a loser.

Before every performance of THE 25TH ANNUAL PUTNAM COUNTY SPELLING BEE, four audience members are recruited to participate on-stage as guest spellers. Each new foursome guarantees a new set of hilarious and unexpected experiences – making every performance unique.

THE 25TH ANNUAL PUTNAM COUNTY SPELLING BEE is a hilarious tale of overachievers’ angst chronicling the experience of six adolescent outsiders vying for the spelling championship of a lifetime. The show’s Tony Award winning creative team created the unlikeliest of hit musicals about the unlikeliest of heroes: a quirky yet charming cast of outsiders for whom a spelling bee is the one place where they can stand out and fit in at the same time.

The San Marin Musical Theater Workshop includes over sixty students, teachers and parents. Many of the parts are double cast, which means that students playing featured parts trade off on alternate performances. “I love that San Marin Music is about inclusiveness.” said director Patrick Nims. “Our cast has been having a blast playing twelve-year-olds and adults that act like they are twelve. This is a very, very funny show.” 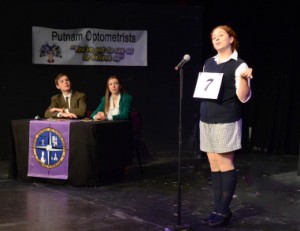