Caitlyn Keaney has been cast in the role of Babette the Feather Duster and is the student choreographer for San Marin’s Beauty and the Beast. 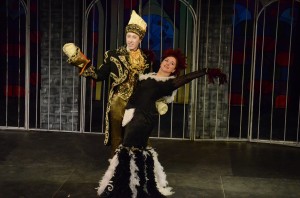 This multi-Tony Award-winning production with music by Alan Menken, lyrics by Howard Ashman and Tim Rice and the book by Linda Woolverton tells the story of a prince transformed into a beast as punishment for his cruelty and selfishness. To become human again, the Beast must earn the Beauty’s love or he is doomed to remain a beast forever.

Running on Broadway for over 5,000 performances and becoming Broadway’s eighth longest-running production in history, the Disney studio’s film version of this French fairy tale became the first animated film to be nominated for a Best Picture Oscar.

A family favorite, kids are invited to dress up as princes and princesses. Tickets for adults are $15, $10 for children, and $20 for the Sunday Matinee Royal Treatment tickets which includes admission for one child, a goody bag, special seating, and a meet and greet with the cast after the show. These special tickets can only be purchased at the high school’s front office. Tickets for all audiences will also be available at the school and at http://www.brownpapertickets.com/event/594661

Dressed as spoons, forks, knives and plates, a teapot, clock, and candlelabra, the actors look forward to performing in this international and magical classic that has entertained kids and adults of all ages for over two decades.