Sarah Modlin and Gabe Mickel in “The Drowsy Chaperone” 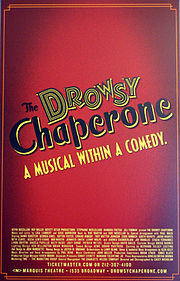 Sarah Modlin and Gabe Michel have been cast in the upcoming production of “The Drowsy Chaperone” at Branson. Sarah will play Kitty, and Gabe is Robert Martin, an oil tycoon and bridegroom. Performances are: March 26, 27, and 28, 7:00 p.m.
The Drowsy Chaperone is a musical with book by Bob Martin and Don McKellar and music and lyrics by Lisa Lambert and Greg Morrison. It is a parody of American musical comedy of the 1920s. The story concerns a middle-aged, asocial musical theatre fan; as he plays the record of his favorite musical, the (fictional) 1928 hit The Drowsy Chaperone, the show comes to life onstage as he wryly comments on the music, story, and actors. The Drowsy Chaperone debuted in 1998 at The Rivoli in Toronto and opened on Broadway on 1 May 2006.
The concept that the audience is listening to the musical on an old LP record is used throughout the show. As he listens to the show, Man in Chair is torn between his desire to absorb every moment of the show as it unfolds and his need to insert his personal footnotes and his extensive-but-trivial knowledge of musical performances and actors, as he frequently brings the audience in and out of the fantasy. As the show goes on, more of his personal life is revealed through his musings about the show, until, as the record ends, he is left again alone in his apartment – but still with his record of a long-beloved show to turn to whenever he’s blue.