Preston Kerwin-Battaglia and Delaney Flanagan cast in Footloose at Throckmorton 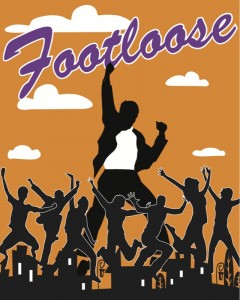 Throckmorton Theater’s Winter 2014 production of Footloose will feature two Sugarman Vocal Studio students in the leads. Delaney Flanagan has been cast as Ariel Moore, and Preston Kerwin-Battaglia has been cast as Ren McCormick.

Performances will be March 7 – 16 and tickets may be purchased on line:
Throckmorton Tickets

Plot: Ren McCormack, a teenager raised in Chicago, moves with his mother to the small town of Bomont to live with his aunt and uncle. Soon after arriving, Ren makes a friend named Willard, and from him learns the city council has banned dancing and rock music. He soon begins to fall for a rebellious girl named Ariel, who has a boyfriend, Chuck Cranston, and an overprotective father, Reverend Shaw Moore, an authority figure in the town.
After trading insults with Ariel’s boyfriend, Ren is challenged to a game of chicken involving tractors, and despite having never driven one before, he wins. Rev. Moore mistrusts Ren, forbidding Ariel to see him. Ren and his classmates want to do away with the no dancing law and have a senior prom.
Ren goes before the city council and reads several Bible verses to cite scriptural support for the worth of dancing to rejoice, exercise, or celebrate. Although Rev. Moore is moved the council votes against him. Moore’s wife is supportive of the movement, and explains to Moore he cannot be everyone’s father, and that he is hardly being a father to Ariel. She also says that dancing and music are not the problem. Moore soon has a change of heart after seeing some of the townsfolk burning books that they think are dangerous to the youth. Realizing the situation has gotten out of hand, Moore stops the burning.
On Sunday, Rev. Moore asks his congregation to pray for the high school students putting on the prom, which is set up at a grain mill outside of the town limits. Moore and Vi are seen outside, dancing for the first time in years.